The So Pure Platinum Espresso offers you the combination of unrivalled style and quality of our bean to cup Platinum Collection coffee machines at an alternative size to suit any environment, the Platinum Espresso is a perfect commercial & office coffee machine. Manufactured from high quality materials including high quality Swiss brew system, pump and grinder. So Pure Espresso offers a go large or go decaf option particularly suitable for HoReCa industry, Office Coffee Service, hotel catering businesses and convenience stores.

Why not choose our So Pure digital TFT screen and create the bigger picture, with the taste impact of a bean to cup beverage machine 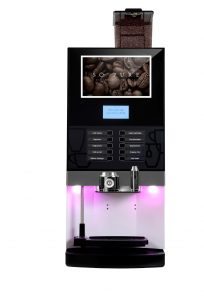 capture the drinker with company news, services or branding products. Where better to capture advertising, than when the drink is being dispensed?

BEAUTIFUL DESIGN AND SUPERIOR CRAFTSMANSHIP WITH